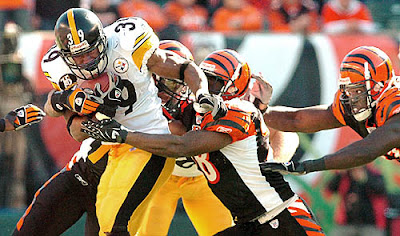 Peter Diana/Post-Gazette
Willie Parker rushed for 126 yards and one touchdown.CINCINNATI -- You know it was a tough, physical football game when the offensive coordinator needed a bag of ice for the plane ride home.

No, wise guy, Bruce Arians didn't apply it to his head, although, after the frightful beating he took last week from the local media and irate Steelers fans, it wouldn't have been surprising.

No one will question Arians' play-calling this morning, not after he and his offense rebounded from the loss in Denver to do their part and a whole lot more in a 24-13 licking of the Cincinnati Bengals yesterday at Paul Brown Stadium. Aside from a Ben Roethlisberger interception in the third quarter -- on a play when Big Ben was feeling frisky after having so much success out of the pocket -- the fellas couldn't have played much better.

It was enough to make Steelers coach Mike Tomlin do a rare bit of gloating at the very start of his postgame press briefing.

"I hope Willie [Parker] ran the ball enough in the first half for you guys."

Who says the coach doesn't read the papers and listen to the gab shows?

Arians was a little more humble. He has been around long enough to know his territory, to know he has the easiest job in town. Everybody's an offensive coordinator, right?

Especially after the fact.

"I don't beat myself up after a game," Arians said, fully aware that others lined up to do it after the 31-28 loss in Denver when the popular belief was that the Steelers didn't hand the pig enough to Parker.

"The best quote I ever heard is something [Hall of Famer] Otto Graham once said when I was in Cleveland and they brought him in to talk to [quarterbacks] Tim Couch and Kelly Holcomb. 'Guys, I never threw a bad pass in my life. Even the ones that were intercepted would have hit my guy right in the chest.'

"That's always stuck with me. That's why I don't second-guess myself."

Arians fairly giggled. It's always easy to laugh at the criticism after a big win. In his position, the public perception is comically predictable. When the plays work and the Steelers win, he's a genius. When they don't work and the team loses, he's a bumpkin.

The truth is that Arians is neither.

"They're the ones who play," Arians said of Roethlisberger, who had a terrific game against the Bengals; Parker, who ran for 126 yards; Hines Ward, who had two touchdown catches among his eight grabs, and the offensive line, which did the grunt work to enable Big Ben, Fast Willie and the leader of the wideouts to do their things.

Arians is right. It always comes down to the players' execution. He can spend hours studying tape and looking for a defense's weaknesses so he can put his guys in the best position to succeed, but -- bottom line -- it still comes down to them.

That's why the heat Arians took after the Denver game was a bit over the top. Who knows if the Steelers would have won if they had run the ball more? All we know is Arians surely didn't call the plays thinking that Roethlisberger would throw two interceptions or that the offensive line would allow four sacks, one of which resulted in a Roethlisberger fumble that was returned for a touchdown. It's not like he took smart pills before the game yesterday. The players just did their jobs better to all but eliminate the Bengals from the AFC North Division race.

"I thought it actually started in the second half in Denver," Arians said. "You can't play better than we did -- three touchdowns in three possessions. We talked during the week about carrying that over into this game. I think they did a good job with that."

Roethlisberger was "awesome," to quote Tomlin, and "on fire," according to Arians, who added, "They did a lot of things on defense, but nothing fooled him."

Roethlisberger was a combined 8 for 9 for 125 yards on the Steelers' first two touchdown drives, ending each with a perfect throw to Ward. He finished with a nifty 109.5 passer rating that would have soared even higher if not for that interception when, under pressure, he tried to force a ball to wide receiver Cedrick Wilson on a third-and-7 play at the Bengals' 11 with the Steelers leading, 21-6.

"It was a stupid throw," Roethlisberger said. "It's just that you make so many plays outside the pocket that you start feeling really confident. I should have just thrown that ball away. Three points there is better than none."

Big Ben played so well otherwise that it didn't matter. His offensive line, which seemed to take those four sacks in Denver personally, helped. "They take pride in protecting me. I like that they take that pride," Roethlisberger said, grinning. Parker also helped in a big way, finding more running room after the early success with the passing game. He gained 83 of his yards after those first two touchdown drives.

All of it made for a pleasant trip home for Arians.

In case you're wondering, the ice was for his surgically replaced knees, which always scream at him after he spends three hours on the sideline.

The man won't need an ice bag for his head for a while.

At least not until next week, anyway.

Email ThisBlogThis!Share to TwitterShare to FacebookShare to Pinterest
Labels: Steelers 2007-08