Steelers' Roethlisberger has it when it counts the most

Ben Roethlisberger's ability to scramble can get him in trouble, but it also has its rewards.


John Elway was the greatest fireman in football, the best at pulling out dramatic victories at the tail end of games. No one did it better nor more often.

Not only does the name "The Drive" belong to Elway, it was forged in a bronze sculpture titled "Master of the Drive,'' to honor the famous 98-yarder he delivered in Cleveland, and stands as a tribute to the quarterback with the most game-winning drives in history.

Elway pulled games out of the fire so often in the fourth quarter that Denver Broncos public-relations man, Jim Saccomano, a legend in his own right, developed a statistic to quantify it. He devised the "game-winning drive" to put in perspective Elway's late heroics.

"It became something I could no longer recite off the top of my head,'' Saccomano said this week about the many requests for the statistic that came his way during Elway's career.

So, in conjunction with the NFL's official stats keepers, the Elias Sports Bureau, Saccomano researched other quarterbacks and compared them to what Elway had done. He came up with the game-winning drive.

The game-winning drive must be a fourth-quarter drive that either wins the game or ties it for an ultimate victory. It's not an official NFL stat, but unofficially Elway has the most at 47 and that's never been disputed.

It may never be approached either, but there's one fellow who is off to a good start. He, too, wears No. 7, mainly because he loved John Elway. Ben Roethlisberger, the quarterback fastest to win 50

NFL games, has 18 winning touc hdown drives (including one in the playoffs), five of them this season.

Elway's rate of GWTDs during his 16-year career was 2.9 per season. Roethlisberger, with at least three games left in this season, has a rate of 3.6. His passer rating this season is down (80.1, from a team-record 104.1 last season), and his touchdowns passes are way down (15, from a team-record 32), but the way Roethlisberger is performing late in games might be enough for him to earn some of the league's MVP votes.

One off-shore oddsmaker lists Roethlisberger's chances of winning the MVP at 5-1, or third behind Adrian Peterson (3-2) and Peyton Manning (2-1).

Roethlisberger could be called the "It" guy, as in he has it when it counts.

"I just think that's the difference between good quarterbacks and average quarterbacks,'' said veteran Byron Leftwich, Roethlisberger's backup this season. "What makes good quarterbacks good is that they can come through in situations like that, put teams on their backs and win football games. And you have some guys in those same situations and no matter what, they can't get the job done." 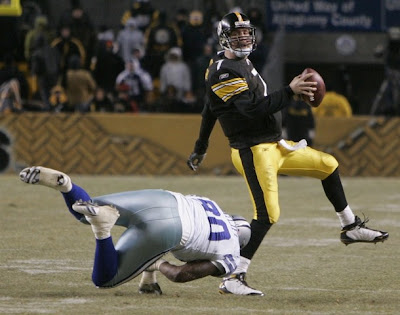 Roethlisberger showed that winning games late would be a trademark of his when he had six game-winning drives as a rookie, one in the playoffs against the Jets.

He will be the first to note that he is not alone in these things, but he has been the common denominator.

Asked about it this week, he recalled an old joke, once told by Jake Plummer, that if he didn't play so poorly in the first three quarters there might be no need for game-winning drives in the fourth.

"I wish it didn't come down to that, but sometimes it does,'' Roethlisberger said. "We'll take it. It adds to the fun and suspense.

"Sometimes we do it just so the fans keep watching."

His most memorable one occurred a week ago, a 92-yarder that beat Baltimore and delivered a division title and first-round playoff bye to the Steelers.

"I didn't give any big rah-rah speeches,'' he said of that drive. "I think the guys look at me now and know me enough to say, 'Let's just go out and do it.'"

Veteran quarterback Charlie Batch, Roethlisberger's backup until a broken collarbone put him on injured reserve this summer, said, "He's one of those guys who understands the situation and thrives on that. You do have to be special to do that.''

His teammates believe as long as they have time on the clock and are within a touchdown, they have a chance behind Roethlisberger.

"That's why everybody calls him one of the best in this game,'' Leftwich said, "because, when the team needs you the most, when it's time to make plays, he jump-started all that. It's what good quarterbacks do. They live for those moments.

"I know what kind of quarterback he is; I played against the guy and now I'm playing with him. I think everybody knows what Ben does for this team."