QB Roethlisberger carves out his own legacy

The specter of what Terry Bradshaw accomplished in Pittsburgh has hung over Ben Roethlisberger after he became the first quarterback the Steelers used a top draft pick on since Mark Malone in 1980. 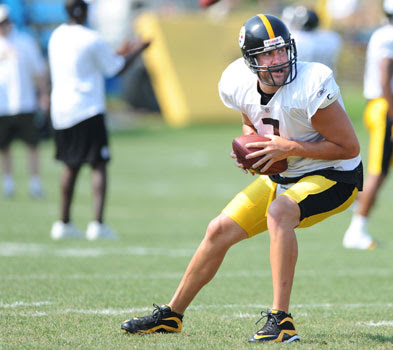 Steelers quarterback Ben Roethlisberger works out at training camp in Latrobe in preparation for the upcoming season.
Chaz Palla/Tribune-Review

What Roethlisberger has done as deftly as he sidesteps an opposing pass rusher is embrace the challenge of Bradshaw's legacy and not get overwhelmed by it.

"They were big shoes when I first got here, and I'm still not going to try and fill them," Roethlisberger said Sunday. "I'm just going to try to be me because he is the all-time Steelers quarterback. I'm not saying I'm the next Terry Bradshaw, because he is one of a kind."

Roethlisberger is proving to be an original as well.

He is the youngest quarterback ever to win a Super Bowl. And at age 27 and just entering the prime of his career, Roethlisberger is poised to take aim at the record Bradshaw shares with Joe Montana for most Super Bowl victories (four).

Assuming Roethlisberger, the 11th overall pick in the 2004 draft, can stay healthy this season, the Steelers at least ought to make a run at defending their championship.

In five seasons, Roethlisberger has engineered 17 fourth-quarter comeback victories, including in the Super Bowl last February.

"It's a dream come true," Steelers offensive coordinator Bruce Arians said of coaching Roethlisberger. "You want to be a coordinator when you have a quarterback who can play like this one and (be) the leader he is. I've been in this situation with guys who didn't have this much talent, and it's hard. If you don't have a quarterback, you're not going to win in this league."

Roethlisberger, whose 51 wins in his first five seasons are the most in NFL history, has been using training camp to play his way into shape. The 6-foot-5, 241-pounder said his arm strength is where it needs to be following an offseason in which he did very little throwing.

Camp has been as quiet as it possibly could have been for Roethlisberger, considering he was accused of sexual assault in a civil suit filed in Nevada a couple of weeks before the Steelers reported to St. Vincent.

Roethlisberger apologized to his teammates the first night in camp for any distractions his situation might have caused. Following the first practice of camp, Roethlisberger took questions for the first time since news of the civil suit broke. But he didn't offer more than a couple of words to any queries that had anything to do with his personal situation and how it might affect his preparation for the upcoming season.

The media scrum that was brief and at times terse allowed Roethlisberger to send the message that non-football related questions were as off limits as he is to defensive players during practice.

That has allowed Roethlisberger to concentrate on tasks such as developing a rapport with young receivers such as second-year man Limas Sweed and rookie Mike Wallace.

"I'm always trying to get better," Roethlisberger said. "For me, it's just learning the offense, learning what plays work with certain defenses."

There are some fans who would no doubt like to see Roethlisberger alter his sandlot style of play. And it seems no matter how much success he has, the sixth-year veteran will always face questions about his propensity for holding onto the ball in an attempt to make a play.

When asked if such carping irritates him, Roethlisberger said: "I don't really care. I like to chuckle (at the media) for saying that."

Roethlisberger has usually gotten the last laugh when it comes to his critics. That is one of the reasons why he is the most important player on the Steelers — and the face of the franchise.

"This is his football team now, offensively for sure," Arians said. "He came in on a very veteran team, and now he is the man. It takes time to develop that. You earn respect. It's not given to you. And he's earned it."

Ben Roethlisberger became only the 10th quarterback to win more than one Super Bowl in February when the Steelers beat the Arizona Cardinals, 27-23. Here are the other quarterbacks who have accomplished the feat: